Each assignment will have an FAQ linked at the top. You can also access it by adding “/faq” to the end of the URL. The FAQ for Homework 2 is located here.

Getting the Skeleton Files #

As usual, run git pull skeleton main to get the skeleton files. Remember you will also need to import the Java libraries from library-fa22.

NOTE: For thi assignment there is a hw2 folder inside the hw2folder. Please open the OUTER hw2 folder when opening the project in IntelliJ.

In this program, we’ll write a program to estimate the value of the percolation threshold via Monte Carlo simulation.

Introductory Video. An introductory video for this HW can be found at this link. It is broken into three parts: Intro, Implementation Spoilers, and Optimization Spoilers. Feel free to ignore these spoilers for a more difficult challenge. If you’d prefer to watch a eight year old video I made when I was at Princeton, see this link.

HW2 Slides. Slides for this HW can be found here. Because this is a HW and not a project, I give spoilers for how to approach the HW. You may ignore them if you’d like a bigger challenge.

Percolation. Given a composite systems comprised of randomly distributed insulating and metallic materials: what fraction of the materials need to be metallic so that the composite system is an electrical conductor? Given a porous landscape with water on the surface (or oil below), under what conditions will the water be able to drain through to the bottom (or the oil to gush through to the surface)? Scientists have defined an abstract process known as percolation to model such situations.

The model. We model a percolation system using an N-by-N grid of sites. Each site is either open or blocked. A full site is an open site that can be connected to an open site in the top row via a chain of neighboring (left, right, up, down) open sites. We say the system percolates if there is a full site in the bottom row. In other words, a system percolates if we fill all open sites connected to the top row and that process fills some open site on the bottom row. (For the insulating/metallic materials example, the open sites correspond to metallic materials, so that a system that percolates has a metallic path from top to bottom, with full sites conducting. For the porous substance example, the open sites correspond to empty space through which water might flow, so that a system that percolates lets water fill open sites, flowing from top to bottom.)

In the diagrams below, you can see that in the system on the left, the water is able to start in a site on the top row and trickle down through empty sites until it reaches an empty site on the bottom row.

Whereas on the right, the water in the site on the top row has no way of trickling down to an open site on the bottom row.

Corner cases. By convention, the row and column indices are integers between 0 and N − 1, where (0, 0) is the upper-left site: Throw a java.lang.IndexOutOfBoundsException if any argument to open(), isOpen(), or isFull() is outside its prescribed range. The constructor should throw a java.lang.IllegalArgumentException if N ≤ 0.

Performance requirements. Your code must use the WeightedQuickUnionUF class! Do not reimplement the Union Find ADT. The constructor should take time proportional to $N^2$; all methods should take constant time plus a constant number of calls to the union-find methods union(), find(), connected(), and count(). Meeting these requirements is somewhat tricky! You might consider creating a solution that simply works, before figuring out a way to make it faster. For tips on meeting the speed requirements, see the video at the beginning of this spec. Your numberOfOpenSites() method must take constant time. Part of the goal of this assignment is to learn how to cast one problem (Percolation) in terms of an already solved problem (Disjoint Sets, a.k.a Union Find).

Note: If you are using IntelliJ, you can choose which class to run (i.e. choose whose main method you want to run) in Run -> Edit Configurations. For more information, please check the FAQ 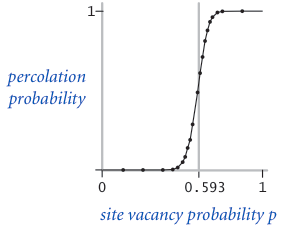 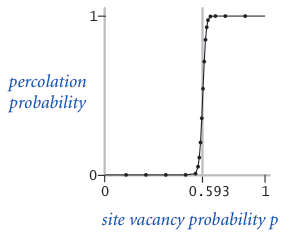 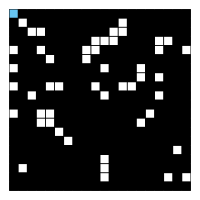 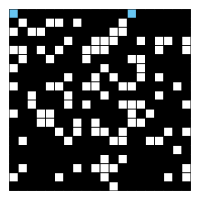 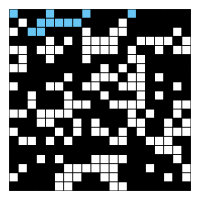 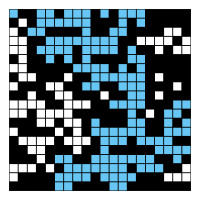 By repeating this computation experiment $T$ times and averaging the results, we obtain a more accurate estimate of the percolation threshold. Let $x_t$ be the fraction of open sites in computational experiment $t$. The sample mean $\mu$ provides an estimate of the percolation threshold; the sample standard deviation $\sigma$ measures the sharpness of the threshold.

Assuming $T$ is sufficiently large (say, at least 30), the following provides a 95% confidence interval for the percolation threshold:

To perform a series of computational experiments, in the hw2 package, complete the PercolationStats data type with the following API:

The constructor should throw a java.lang.IllegalArgumentException if either N ≤ 0 or T ≤ 0.

The constructor should take three arguments N, T, and pf, and perform T independent computational experiments (discussed above) on an N-by-N grid. Using this experimental data, it should calculate the mean, standard deviation, and the 95% confidence interval for the percolation threshold. When performing your calculations, don’t forget that integer division rounds down to an integer!

This part of the HW will not be graded, but it is highly recommended that you at least read though and think about the following points:

We provide two clients that serve as large-scale visual traces. We highly recommend using them for testing and debugging your Percolation implementation. Only uncomment the contents of these file once you are done with Percolation and PercolationStats.

For the input file, input20.txt, the program should produce output as shown in the following images. The images correspond to the 50, 100, 150, 204, and 250 sites being open, respectively. 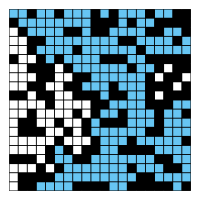 You can run the visualizer on this input by passing in the correct arguments to the IntelliJ program’s Edit Configurations-> + -> Application -> Set main class -> Set args tab (arguments: inputFiles/input20.txt).

Sample data files. The inputFiles directory contains some sample files for use with the visualization client, including the input20.txt that we saw above.

Interactive Visualization client. InteractivePercolationVisualizer.java animates the results of opening sites in a percolation system, using the mouse as input. It takes a command-line integer N that specifies the grid size. As a bonus, it prints out the sequence of sites opened in the same format used by PercolationVisualizer (described above), so you can use it to prepare interesting files for testing. If you design an interesting data file, feel free to share it on Ed.

We have not provided tests for you. If you would like to create unit tests to test your code, you may create an additional file and write tests.

You should submit the usual way, by pushing to GitHub and then submitting on Gradescope.

This assignment originally developed by Kevin Wayne and Bob Sedgewick at Princeton University, with autograder built by Josh Hug for the Princeton Algorithms course.